“Staff here at TeamHEALTH have expressed their appreciation for the level of oversight that we have with StaySafe now in place."

TeamHEALTH switched to StaySafe from their manual telephone system to improve lone worker well-being for its outreach workers.

TeamHEALTH is a local mental health organisation located in the Northern territory of Australia. Consisting of around 145 outreach workers, their purpose is supporting people experiencing mental illness. Outreach Support at TeamHEALTH offers a variety of support services both at participants’ homes and in the community.

Outreach workers supporting those with varying degrees of mental illness

Day to day, employees at TeamHEALTH face a range of potential risks when working in isolation. Their workers can see up to five participants a day, who can be up to an hours’ travel apart.

The nature of support that TeamHEALTH provides and the complex needs of participants, means that some people can present a high risk to themselves and TeamHEALTH’s workers. A typical day for workers can involve transporting participants to appointments, meeting them at coffee shops and in various locations that are sometimes isolated.

“Our participants can be unaware of their actions. They can be aggressive and sometimes they can even be at risk to themselves, depending on the state of mind that they’re in.” Explains Jesse Chamberlain, Coordinator, Adult Supports at TeamHEALTH

Due to these risks, TeamHEALTH needs robust health and safety processes in place to protect its staff and ensure that help can reach them in an emergency.

TeamHEALTH considers the safety and well-being of its workers to be vital in ensuring it provides the best possible support to its participants. Before onboarding with StaySafe, TeamHEALTH found keeping track of staff welfare difficult because their previous system was not as efficient nor agile in the case of an incident.

Speaking about the decision to work with StaySafe, Jesse explained that: “When we were looking for a new safety solution, our aim was to promote worker well-being and show that we are doing our absolute best to ensure the safety of our staff.”

Since switching to StaySafe, staff at TeamHEALTH have found that worker safety has improved dramatically. This is mainly due to StaySafe’s ease of use, which makes the app and its features accessible to everyone. Management are able to view the status of each worker via the cloud-based hub and message them directly via the app should they need to update them.

“Ease-of-use is our key requirement across the organisation when it comes to new technology “explains Jesse, “We have quite a diverse range of staff, and whilst some are digitally literate, others occasionally need some assistance. StaySafe ticks all of the boxes and everyone has found the app very user friendly”.

From ease of use and helpful alerts through to comprehensive training and support, TeamHEALTH have seen a number of benefits from switching to the StaySafe app.

Due to StaySafe’s streamlined user interface and the comprehensive training provided, new users at TeamHEALTH are able to get up and running on the app in around thirty minutes. Staff at TeamHEALTH have praised the app’s ease-of-use and accessibility, whilst expressing that they feel safer knowing that the help is there should they need it.

“Staff here at TeamHEALTH have expressed their appreciation for the level of oversight that we have with StaySafe now in place. It’s good to know that they are safeguarded should anything happen, and help is needed” says Jesse.

TeamHEALTH uses StaySafe’s check-in feature during their working hours. The majority of the workers at TeamHEALTH set 6-hour sessions within the app when they are out in the community. Should an employee fail to check-in when expected, steps can be taken immediately to ensure their safety.

Since implementing StaySafe, TeamHEALTH has had no reported critical incidents. Staff have also found that the app has safeguarded them by acting as a deterrent in moments that could have potentially led to a serious incident.

At TeamHEALTH, all monitoring is carried out in-house via the StaySafe cloud-based hub, which gives them complete control and flexibility around how they manage employees and alert responses. Depending on the size of a company’s team and resources, employers can choose to monitor activity in the hub in-house or outsource to one of StaySafe’s professional 24/7 monitoring and response partners. There is also the flexibility to combine both options to structure a bespoke service to meet a company’s needs.

Our comprehensive guide covers everything you need to know about lone working. From identifying the lone workers in your organisation, to the risks they face in different environments, our lone worker guide will ensure you know how to keep your staff protected and meet your legal duty of care. Yes, review policy 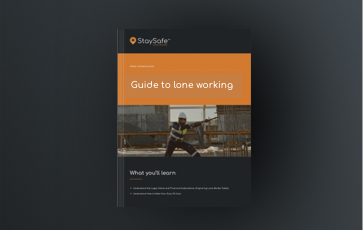